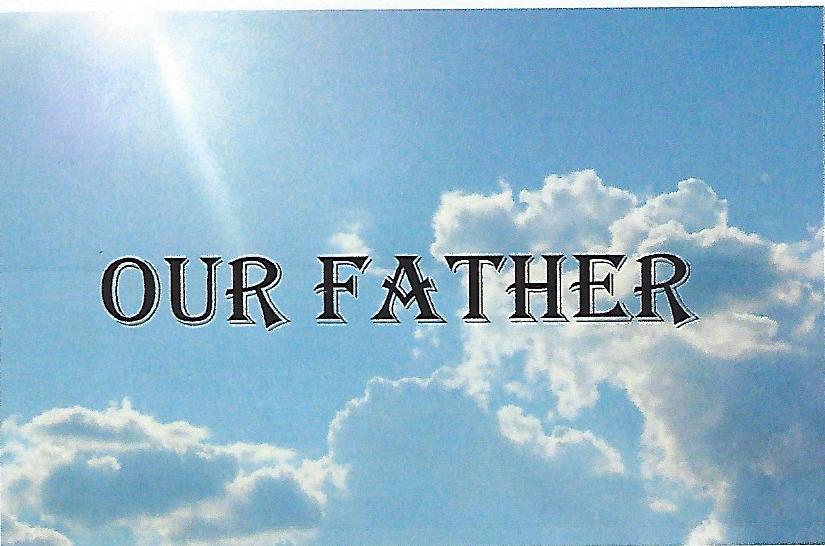 “Enjoy yourself.  These are the good old days you are going to miss in the years ahead.”  - anonymous

Don’t discount today.  Don’t reject the good that may be in the present.

These are not the best days.  There are days fraught with tension, uncertainty and worry.  But they are also the only days we have.

In addition to the sad memories, they will recall being together, supporting each other, finding innovative ways to cope and care.  They will remember loving parents who went out of their way to make life livable, even good at times, in the midst of the challenges.

There is a lot about the present we can’t change.  But there is even more in how we respond and how we can live.  We can live in the victorious faith of the people of Jesus Christ.

I really believe that a large part of the appeal of Jesus was that Jesus opened up the gloomy sky of the times and let the sunshine in.  Not one of us would want to live then.  The nation was under the relentless thumb of Rome.  Most people scratched out a meager marginal existence.  The future looked grim.  Even the religion was a remote matter of heartless obedience to the law and the endless, bloody cycle of animal sacrifice at the Temple.

But Jesus showed people light and life in the presence of a warm and loving, personal God whom he told them to call, “Our Father.”  Is it any wonder they flocked to him?  On top of it he worked miracles that gave everyone hope, unstopping the ears of the deaf, cleaning the lenses of the eyes of the blind, unstiffening the joints of the crippled, even restoring the pulse of the dead.  When we recall the days when Jesus walked among us, we mostly remember the beautiful and good that surrounded him.

Right now.  Here and now, Jesus is doing his miraculous work, forgiving our sin, driving our church and enriching our lives.

It may be true that there were easier days in our past.  But the easiest days of our lives are not necessarily the most memorable.  I am sure that many people will look back on these times as the times when people moved closer to one another in love, when the church rose to meet the challenges and when Jesus was as close as ever.

After Jesus rose from the grave, two of his disciples were walking on the road to Emmaus.  They were trying to cope and make sense of the death of Jesus.  Jesus came up to them and joined them in their sad walk, but they did not recognize him.  You know the story.  They get to the Holiday Inn Express and find a nearby restaurant and have dinner with the stranger.  After dinner they urge him to stay with them but he vanishes.  Then they realize that all along it was Jesus who had walked with them.  They said this, 32 They said to each other, “Were not our hearts burning within us[k] while he was talking to us on the road, while he was opening the scriptures to us?”  (I have copied the whole incident below)

I’ll bet that in every year after that, those disciples would get together to celebrate the anniversary of that amazing day.  Maybe they would retrace their steps and with feet burning from the long hike, they would recall how their hearts burned within them.  They would go back to the same restaurant and reserve that same table – no other table would do – they would pay an irresistible tip to the owner of the place to sit at that same table – and they would eat and recall how one of the worst days of their lives became one of the best.  Because Jesus was there.

Please join me in prayer.  Lord, help us not to disdain the day.  Strengthen us to live up to the challenges.  Reduce our fears.  Amp up our trust in you.  Help us to know your Son is with us, in thick and thin.  Help us to make the most of the time.  And show us how we can make this a better day for someone else.  We ask in Jesus name.  Amen.

Now on that same day two of them were going to a village called Emmaus, about seven miles from Jerusalem, 14 and talking with each other about all these things that had happened. 15 While they were talking and discussing, Jesus himself came near and went with them, 16 but their eyes were kept from recognizing him. 17 And he said to them, “What are you discussing with each other while you walk along?” They stood still, looking sad. 18 Then one of them, whose name was Cleopas, answered him, “Are you the only stranger in Jerusalem who does not know the things that have taken place there in these days?” 19 He asked them, “What things?” They replied, “The things about Jesus of Nazareth, who was a prophet mighty in deed and word before God and all the people, 20 and how our chief priests and leaders handed him over to be condemned to death and crucified him. 21 But we had hoped that he was the one to redeem Israel. Yes, and besides all this, it is now the third day since these things took place. 22 Moreover, some women of our group astounded us. They were at the tomb early this morning, 23 and when they did not find his body there, they came back and told us that they had indeed seen a vision of angels who said that he was alive. 24 Some of those who were with us went to the tomb and found it just as the women had said; but they did not see him.” 25 Then he said to them, “Oh, how foolish you are, and how slow of heart to believe all that the prophets have declared! 26 Was it not necessary that the Messiah should suffer these things and then enter into his glory?” 27 Then beginning with Moses and all the prophets, he interpreted to them the things about himself in all the scriptures.

28 As they came near the village to which they were going, he walked ahead as if he were going on. 29 But they urged him strongly, saying, “Stay with us, because it is almost evening and the day is now nearly over.” So he went in to stay with them. 30 When he was at the table with them, he took bread, blessed and broke it, and gave it to them. 31 Then their eyes were opened, and they recognized him; and he vanished from their sight. 32 They said to each other, “Were not our hearts burning within us while he was talking to us on the road, while he was opening the scriptures to us?” 33 That same hour they got up and returned to Jerusalem; and they found the eleven and their companions gathered together. 34 They were saying, “The Lord has risen indeed, and he has appeared to Simon!” 35 Then they told what had happened on the road, and how he had been made known to them in the breaking of the bread.