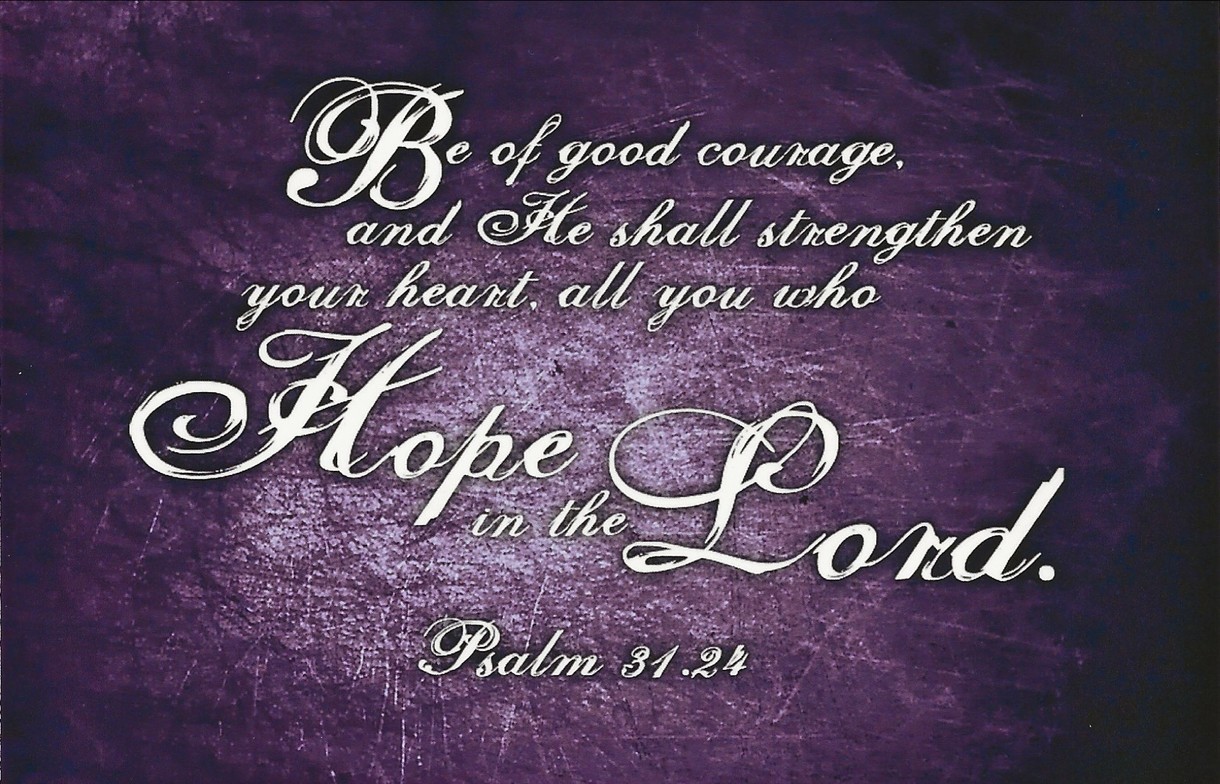 We can find courage in being God’s people. The Bible exhorts us to have courage.

Having said that, some people will be saying, “Well, that leaves me out.” Most of us struggle with fear, worry and anxiety.

But having courage does not mean we are not afraid. In fact, fear is a feeling or emotion, but courage is not a feeling. Courage is more a matter of the will. You can be filled with fear, but go ahead and face the challenge anyway, which is courage. Consider this, “Bran thought about it. 'Can a man still be brave if he's afraid?' 'That is the only time a man can be brave,' his father told him.” —George R.R. Martin, A Game of Thrones

And let’s add that courage has other elements – it is not foolish or reckless and courage means trust in something for a good resolution. Which is how the Bible deals with courage. One of the most courageous actions in the Bible is David and Goliath. The army of Israel and its king trembled against the forces arrayed against them. The fear paralyzed them. The boy David called on the army to remember who they were, God’s people. That gave him the courage to face impossible odds. The quintessential story of courage is Caleb in the book of Numbers. Moses sends out his spies to scout the enemy territory they are entering. The spies come back terrified at what they saw – a land filled with giants. It was impossible to fight them and win. But Caleb musters courage. Why? Because God is right there with them, commanding them and ultimately defending them and finally giving them victory.

That’s the lesson of the Bible for us. Throughout the whole Bible we are told not be afraid, God is with us. Jesus is with us. Yet we tremble.

Does that stop us? That is the question. Do we freeze, or do we go on in trust, with confidence? The word confidence means “with trust,” or as I prefer it, “with fidelity.” “With faith. Victory is not in my hands, but the Lord’s.

Mark Twain said, “Courage is resistance to fear, mastery of fear – not absence of fear.” We face the thing of which we are afraid despite our fear. Hence courage is a matter of the will. John Wayne put it this way, “Courage is being scared to death…but saddling up anyway.”

The Bible tells us we are not alone when we face life’s challenges, no matter how fearsome. But even that is not the point. The point is that living God’s way, obeying and loving him can be the scariest thing we will ever do. Devoting everything about us to God. Loving neighbor as self. Forgiving enemies. Giving rather than getting. This lifestyle can be the scariest of all. But we strive to live like Jesus as a matter of the will, to have courage, despite our fear where that might end up.

What we are saying here about courage, that it is a matter of the will is also true of the love that the Bible commands us. Jesus said to love your enemy and pray for those who persecute you. No one feels love for people who are hurting us. No. Such love is a decision, not a feeling. A matter of choice, not an emotion. C. S. Lewis put it this way, “Courage is not simply one of the virtues, but the form of every virtue at the testing point.” Courage means acting unsure of the result, trusting it is the right thing to do, the thing God wants us to do, the thing God will use for his purposes no matter what. John Piper wrote, “Christian courage is the willingness to say and do the right thing regardless of the earthly cost, because God promises to help you and save you on account of Christ.”

Was it not on that dreadful night when the Son of God was arrested and taken away? His band of disciples who professed to love him without reservation, who had left everything to follow him, ran away and abandoned him, let him be dragged to the cross and denied even knowing him when the authorities came for him? It was the greatest lack of courage in the history of the world. Yet you and I are in church because of the witness of those very cowards who, when the Risen Christ came to them, went out and became the church and started witnessing. It doesn’t depend on our courage, it depends on the God who loves us. It depends on that God who, it seems, is going to use us no matter how many times and how hard we fail him. How much more then do we pray for strength in our weakness?

How can we be sure and have courage no matter how great our fear? It is in the Bible. The Bible is a record of the great acts of God. In the Bible we read how God has always, vindicated, redeemed, stood by and sanctified his people. Those are not words on a page, they are the truth. We read that truth and God sustains us by showing what has done and tell us it is what he is doing in us.

Please pray with me. “Heavenly Father, God almighty, we sometimes live as if you are powerless. Facing our struggles and trials, we think we are alone and we tremble in fear. Remind us whose we are. Remind us of your purpose and power. Help us to live with confidence and trust. Sweep away our fears and in their place put a rock-like assurance of what you are doing and what you are doing with us for your kingdom. Help us to fall back in your care, knowing that you are with us always and that we are more than conquerors through him who loves us. In his name we ask. Amen.”