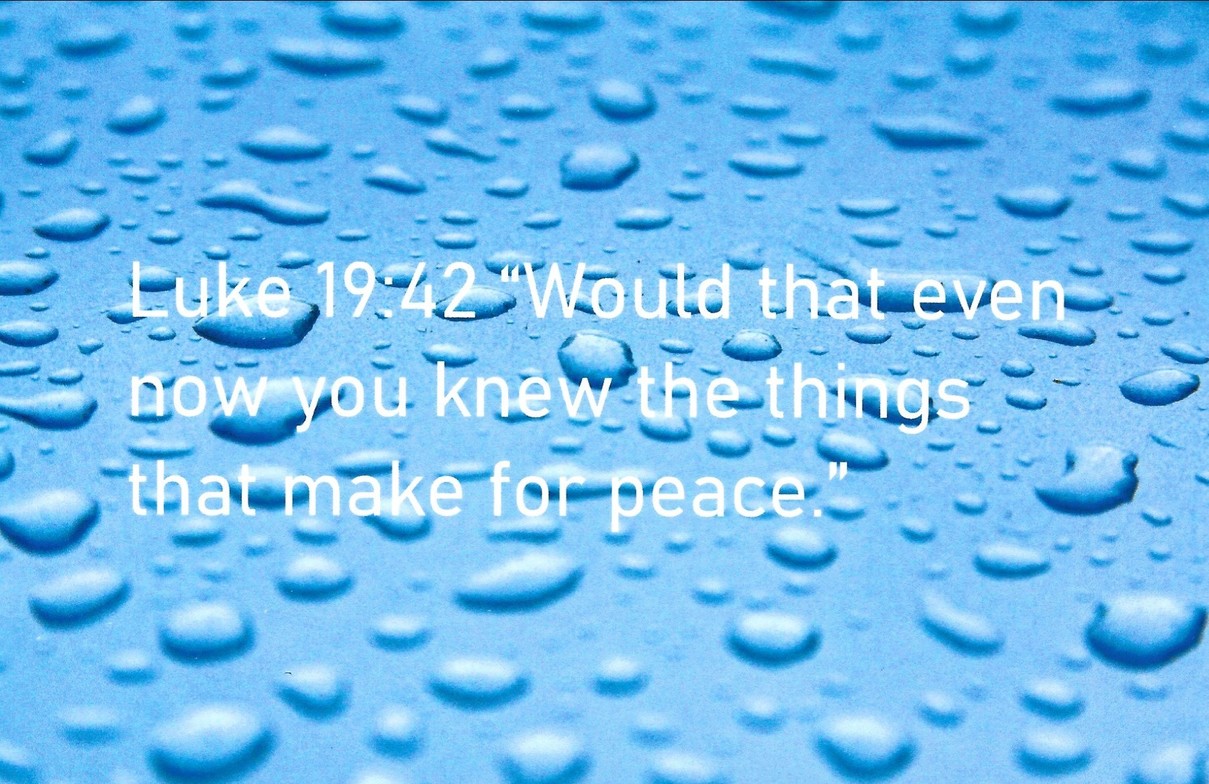 When Jesus was approaching Jerusalem, knowing full well what it meant for him to go to that city, he pronounced a lament over Jerusalem. In Luke’s gospel (chapter 19) we read, 41 And when he drew near and saw the city he wept over it, 42 saying, “Would that even today you knew the things that make for peace! But now they are hid from your eyes. Jesus cried. He knew what was coming to Jerusalem. Never mind his own death, soon Jerusalem itself would be snuffed out. Jerusalem should have been the place I the world that welcomed him with open arms. He was the son of David (in the lineage of David and God had promised that the kingdom would be ruled by a descendant of David), he was the Son of God, he was the Christ. Instead of welcoming him, they humiliated him, lied about him and then crucified him. Earlier in Luke’s gospel (chapter 13) we hear Jesus lamenting that Jerusalem stoned the prophets and persecuted the very ones sent to save it by God.

I want you to focus on that one phrase in the verse from Luke 19. “Would that even now you knew the things that make for peace.” This verse has always meant a lot to me. I grew up in a time when peace was very much on the minds of people. My parents’ lives had been shaped by the Second World War and when that war ended they could finally live lives. The Korean War came (my father said he was grateful for my sister and me because he had two children they did not “call him up” to go to war). Then of course my generation grew up in a time when the nation was wrenched apart over the Viet Nam War. Peace mattered.

Now when Jesus said, “Would that even now you knew the things that make for peace,” he was talking about peace with God. The Bible and our confessions make it clear that humankind is at war with God. We wish to control our own destinies and God wants our fidelity in love.

That is the primary meaning. But extending it, it has always intrigued me that there is a path to peace, but we don’t know it. Hence, “Would that even now you knew the things that make for peace.” What are those things? If we knew and wanted them, strife and war and conflict would end.

Well we saw one such thing that makes for peace this weekend. In several places around the country the police were out in force to try to control the demonstrations and to prevent riots. In several places the police officers did a stunning thing. They knelt. The phrase used in the news was “they took the knee.” I am not going to use that phrase because for some people it is politically charged.

I saw those police, in some cases the chief of police, many of them white, kneel in front of the protesters and bow their heads. You know what I said to myself? “I wish I had thought of that.” Without a word, the police humbly made a symbolic statement. Their gesture said, “We hear you.” (Remember my sermon Sunday?) That gesture said, “We mourn with you.” That symbolic act said, “We are in this together.” It did not necessarily say, “We agree.” It said we understand and we care and we are together citizens of this community and will work with you to make things right.”

The things that make for peace.

Now, I reckon someone reading this is saying, “Man, Fred! You are so naïve! That was a political gesture.” If you are being cynical about what I believe it meant for those officers to kneel in front of the protesters – with the protesters - please do me a favor? Don’t burst my bubble. If you think I am wrong and naïve, please leave me alone and let me relish what I consider to be one of the most beautiful things I’ve seen the past weeks when we have had to struggle with the unprecedented challenge of death from COVID 19 and the deaths that accompanied it because treatment wasn’t available because so many resources had to be used to fight the virus. If you think I am deluded, please let me keep this delusion?

I think this was an example of “things that make for peace.” And I think it should be said, it did not come from congress, or the White House, or the courts. It did not come from people of power or the wealthiest people. It came from the guy (and woman) in the street. Men and women sworn to “serve and protect.” Not control. “Serve and protect.” Nothing anyone could have said could equal the power of that humble, loving gesture.

“Would that ever now you knew the things that make for peace.”

Son of God you are so right that we don’t know the things that make for peace. To you we confess that. From you we ask that you teach us. We want to know what beautiful gestures we can make that lead to peace and not conflict. Please show them to us. Amen.